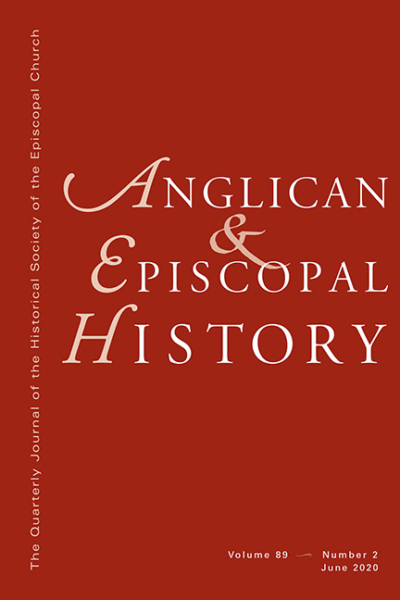 The Summer 2020 issue of Anglican and Episcopal History (AEH) is available featuring research essays, church reviews, and book reviews. AEH is the peer-reviewed journal of the Historical Society of the Episcopal Church (HSEC).

In the issue, the Rev. Robert B. Slocum’s lead article examines the “Faith, Freedom, and Sacrifice” of Episcopal seminarian Jonathan Daniels (1939-1965) who was murdered while advocating for Civil Rights in Alabama. This is followed by “The Making of the American Prayer Book of 1928” by Prof. Lawrence Crumb who helps “…reveal an approach to the task of revision that was both conscientious and meticulous…” possibly providing ideas for contemporary prayer book revision. The final study, “Institutionalizing Theology: A.B. Goulden and the Community of Reparation to Jesus in the Blessed Sacrament”, offers an Anglo-Catholic perspective by Nashotah House professor Greg Peters.

In addition to the three studies, church review editor J. Barrington Bates introduces a series of upcoming reviews that will examine ways parishes are adapting worship during the COVID-19 pandemic. Bates describes the “wide spectrum of responses in worldwide Anglicanism.” The first review of the series visits the Diocese of Pittsburgh’s St. Thomas’ Episcopal Church in Canonsburg, Pa.

Book reviewers consider past and present visions for the Anglican Communion using Ellen K. Wondra’s “Questioning Authority: The Theology and Practice of the Authority in the Episcopal Church and Anglican Communion,” Ashley Null and John W. Yates III’s “Reformation Anglicanism, A Vision for Today’s Global Communion,” and “The Promise of Anglicanism” by Virginia Theological Seminary professors Robert Heaney and William Sachs.

These and other book reviews in the summer issue are available to members of HSEC and later available on JSTOR.org and other online services.

About Anglican and Episcopal History
Anglican and Episcopal History (ISSN 0896-8039), formerly The Historical Magazine of the Protestant Episcopal Church, seeks to raise the level of discussion, provide a forum for exchange of ideas, and review books of real worth and of interest to educated Anglicans. It is published quarterly in March, June, September, and December. Full text articles are available through JSTOR.org and for members of the Historical Society of the Episcopal Church at hsec.us/AEH.

About the Historical Society of the Episcopal Church

Founded in 1910 in Philadelphia as the Church Historical Society by a small group of clergy and laity who were determined to provide an organization and structure to focus on keeping the history of the church and share it with others. HSEC members include scholars, researchers, teachers and students, archivists, historians, professionals, and enthusiasts of history. Anyone who has an interest in the objectives of HSEC is invited to visit: hsec.us/membership.