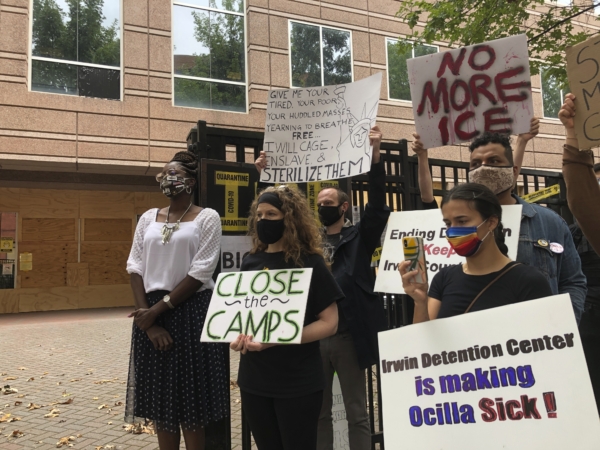 Dawn Wooten, left, a nurse at Irwin County Detention Center in Ocilla, Georgia, listens to a speaker at a news conference in Atlanta on Sept. 15, 2020, protesting conditions at the immigration jail. Photo: Jeff Amy/AP

[Episcopal News Service] A priest who works to support immigrants detained by U.S. Immigration and Customs Enforcement at a private facility in Georgia says a whistleblower’s account of medical abuse there – including hysterectomies performed without proper consent – is supported by her own interactions with the detainees.

The Rev. Leeann Culbreath, a priest in the Diocese of Georgia, has worked with and advocated for detainees at Irwin County Detention Center in south-central Georgia since 2016 as a volunteer with the South Georgia Immigrant Support Network. She is also a co-facilitator of Episcopal Migration Ministry’s Episcopal Ministry for Immigrant Detention, which connects people working with detainees around the country.

On Sept. 14, the South Georgia Immigrant Support Network and three other organizations filed a complaint that includes accounts from a whistleblower named Dawn Wooten – a nurse who works at Irwin County Detention Center – and the detainees themselves that describe not only unsanitary conditions but pervasive medical abuse and neglect at the facility.

The aspect of the complaint that has received the most attention is the report of unusually high rates of hysterectomies performed on detainees, many of whom did not fully understand why the procedure was done or were given conflicting descriptions of what would be done to them, raising a host of ethical concerns. 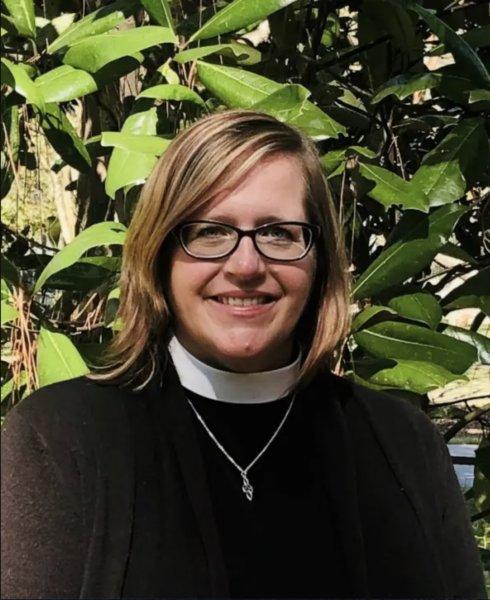 Culbreath had observed this herself over the past year and a half. As detainees told her of their experiences, she compared notes with other people who worked with them.

“Several of us volunteers and some attorneys who were working with the women would just kind of comment, ‘You know, doesn’t this seem like a lot? Gosh, they had a surgery too?’”

And while Culbreath knows at least one woman who clearly needed and wanted a full hysterectomy, others – as documented in the complaint – said they neither needed nor wanted it.

“There were gynecological procedures happening at a rate that seemed higher than the norm, to the point that pretty much everyone going [for any gynecological treatment] seemed to be getting the same thing,” Culbreath told Episcopal News Service. “There’s enough red flags going up that people may be getting treatment they really don’t need.”

With limited access to the facility and only anecdotal reports, it was difficult for Culbreath and other advocates to act until Wooten came forward with detailed descriptions of what she witnessed as a nurse. Wooten reported that the detention center sends women to a particular gynecologist outside the facility, and “everybody he sees has a hysterectomy — just about everybody.”

“[Wooten] stated that while some women have heavy menstruation or other severe issues that would require hysterectomy, ‘everybody’s uterus cannot be that bad,’” the complaint says.

The reports have drawn comparisons to past instances of forced sterilization in the United States and even in Nazi Germany.

“When I met all these women who had had surgeries, I thought this was like an experimental concentration camp. It was like they’re experimenting with our bodies,” Wooten said in the complaint.

“This particular instance demonstrates how important it is to have the local church engaged in the work of ministering to those in detention,” said Allison Duvall, manager for church relations and engagement at Episcopal Migration Ministries, who helped start Episcopal Ministry for Immigrant Detention with Culbreath. “Without Leeann’s leadership and the work of so many of her colleagues and other organizations on the ground, these alleged abuses would not be coming to light.” 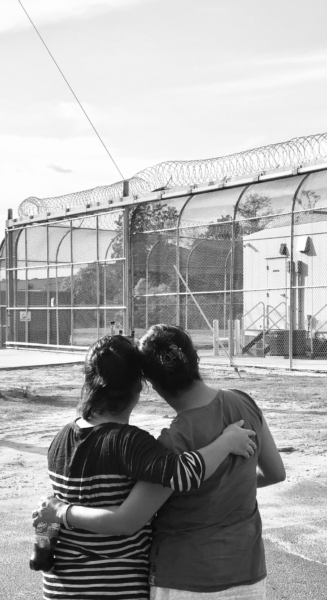 Two sisters are reunited outside Irwin County Detention Center in Ocilla, Georgia, after one of them was released on bond. Photo: Leeann Culbreath

Culbreath visits detainees, building relationships and accompanying them through the tedious and difficult immigration process. Over the years, the detainees have shared their accounts of the “dehumanizing” conditions with her.

“The conditions are abysmal. It’s crowded. It’s dirty,” Culbreath told ENS. She mostly meets with detainees in a separate visiting area, but she has toured the facility and seen the conditions firsthand.

“You’d have 100 women in an open, two-story dorm with maybe four toilets, four shower nozzles, drinking fountains. They don’t even give them water cups. They have to buy those from the commissary if they want a cup for drinking water.”

The meals consist of poor-quality processed foods, with meat once a week and very few fresh vegetables or fruit, detainees have told her. Sometimes there are bugs in the food. Solitary confinement is used for punishment. And the conditions have only worsened since the COVID-19 pandemic hit, she said.

“This place is not equipped for humans,” one detainee was quoted as saying in the complaint.

Even before COVID-19, serious medical problems were being reported. Detainees have reported being denied crucial, life-saving medications and access to a doctor for weeks – even when they are obviously sick and in pain. Wooten said other nurses routinely shredded detainees’ requests for medical care without evaluating them and falsified medical records to avoid providing care. And COVID-19 has magnified the systemic medical abuse and neglect, the complaint says. Wooten and detainees report that staff often refuse to test detainees who have symptoms of COVID-19, do not properly quarantine new arrivals and have not provided sufficient personal protective equipment. Staff are also instructed to work even if they have COVID-19 symptoms – and even if they have tested positive. Dozens of detainees and employees at the detention center have tested positive, though Wooten said she believes the number to be much higher, and at least one employee has died of the virus.

Culbreath believes the motive behind the reported unnecessary hysterectomies is the financial incentive that drives the private prison industry, which is “undergirded by racism.”

“I think the profit motive is a big factor behind it,” she said. “This is a for-profit facility, and so wherever they can cut costs, they can have an exclusive contract. A doctor who has an exclusive contract with a facility like that doesn’t have a lot of accountability. The patients he or she is seeing can’t get a second opinion; they’re very vulnerable. And so one could say that there could be a motive to do more surgeries because you can bill for more surgeries.”

Culbreath says this is just one jarring example of the problems with private detention facilities like Irwin County Detention Center. Despite the fact that many ICE detainees have not committed any crime – many are asylum-seekers undergoing a legally sanctioned process, or they simply had expired paperwork – those in private facilities are often subjected to worse conditions than convicted prison inmates.

“It’s prison, but it’s worse than prison,” Culbreath said. “They don’t receive the kind of services that inmates in prison would receive. … Detained persons are employed by the facility for $1 a day to perform the basic functions of the facility, like cleaning.”

That’s not enough for them to buy the personal products they need or make phone calls to their families, but it can be their only option for income.

“This is another form of slavery, just as mass incarceration is,” Culbreath said.

And with detainees unable to work their shifts due to COVID-19, many of the essential tasks aren’t getting done. With little accountability and an underlying financial motive to cut costs and generate profits, conditions can deteriorate to dangerous levels.

“These facilities are cutting costs wherever they can then by employing detained persons for $1 a day instead of even $5 a day, let alone minimum wage,” Culbreath said. “But they’re getting, like, Hilton rates per day from government contracts. We’re paying for it! Taxpayers are paying for this; the corporations managing the facilities … are profiting from it.”

Culbreath hopes there will be a thorough investigation into Irwin County Detention Center and that it will eventually be shut down.

“I don’t think there’s a humane way to run it,” she said.

But what might replace the current system, especially given the fact that many rural communities have come to rely on detention facilities as their main economic drivers? That’s where the church might come in, Culbreath said.

“You still have an immigration system. And what is the church’s role in that? And how can the church be part of transitioning rural communities that lose this?”

Whatever the solution, Culbreath sees ending inhumane detention conditions as a moral and civic imperative.

“I don’t think it’s humane to incarcerate people in those conditions, especially those who are not criminals and are not serving a sentence and are not receiving due process. So I just I think it’s fundamentally unconstitutional and also morally repugnant.”